Arizona elk hunting has a long history of being some of the best big game hunting available. As elk populations have risen and fallen over the last hundred years, new conservation practices have allowed herds to grow and consistently stay at healthy and thriving levels. 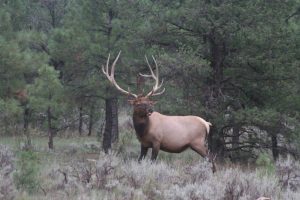 When the fall season rolls around, many opt for Arizona elk hunting in hopes of not only bagging a trophy bull, but for the pure challenge of hunting one of the animal kingdom’s most elusive creatures. Because elk habitat can vary so widely, hunters have a choice of any number of spectacular settings in which to take on their challenge.

The most common kind of elk found on an Arizona elk hunting trip is the Rocky Mountain Elk, also known as Wapiti. The male Rocky Mountain Elk weighs in at 700 pounds or larger. Their hide is thick and internal organs large, protected by a ribcage that consists of very tough cartilage.

In order to make a clean shot that is efficient and ethical, the right ammunition for bringing down such large game is absolutely imperative. Many underestimate just how substantial even female elk can be until viewing one up close. Many also misjudge this massive creature’s ability to easily elude even the most experienced hunter.

Those looking to engage with elk hunting in Arizona will find themselves gearing up during the fall months of mid-September all the way through October. This is the time that elk go into rut, or their mating season. Males become aggressive, bugling loudly and looking to mate with other females. This is where the use of elk calls becomes one of the most important aspects of the hunt.

There are a great number of calls on the market allowing hunters to mimic bulls or cows. The key is to not only entice quarry with calls but to know how and when to use them. Too much or too little bugling will tip off the ever wary elk, who will become completely quiet or move out of the area altogether.

One of the best options for an Arizona elk hunting trip is the use of an outfitter or experienced guide. This is especially true for those who are not well versed with the geographical location they are hunting in or for those inexperienced with the aspects of hunting this type of large game. A knowledgeable guide will be able to offer tips, tricks and advice for finding and bagging elk. They will also be able to provide a helping hand in moving the massive creature once it is down. A majority of outdoors-men opt for guided hunts, regardless of their level of hunting experience.