If grizzly bear hunting is what tickles your fancy, travel to Alaska and hunt in the Management Unit 9. Grizzly bears dominate Unit 9. They dominate Unit 21 in Alaska, too. Grizzly bears are considered one of the most dangerous, unpredictable bears in the world, so considerable care is needed when hunting these types of bears. 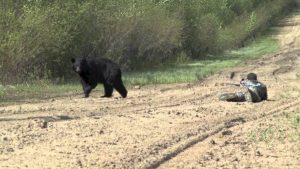 It has been noted that Grizzly bears and brown bears are interchangeable. Outfitters and guides will dispute this belief as they encounter both grizzly and brown in their day-to-day life. Those that travel on the shoreline while hunting will experience more brown bears. Those hunting more in the interior will come across more grizzlies. Grizzlies are also smaller than brown bears, but genetically, they are the same.

Brown bear hunting is as dangerous as hunting grizzlies. Brown bears are physically larger because they live in a more temperate climate, and their diet is high protein, high-fat salmon. They are also distinguished by their coloring, which can be anywhere from blonde to brown, and even black.

Black bears, smaller than other bears, are not in any danger of becoming extinct. Their only major threat is poaching. Legal hunting that is hunting with a licence regulates the number of bears able to be harvested, which is vital to preserve the number of bears in the wild.

Before you go bear hunting, make sure you have the proper equipment to make your hunt successful. Your hunting rifle must be a 30 calibre or higher, and the barrel must be channel glass bedded. The best rifle to use is one that shoots consistently in all types of weather. Outfitters will also tell you that you are responsible for your gear the ammo, sleeping bags, personal items, and your firearms permit. Make sure you carry that license with you at all times when hunting. Alcohol is allowed in camp, but only in moderation. Excessive drinking and firearms are a dangerous combination.

Food banks are the recipients of harvested game animals. As a bear is a huge beast, you would not be able to go through that much meat on your own, so outfitters, who are needed by law to salvage the meat, donate it. You can take some bear meat home if you wish.

Learn the tagging system of the area you plan on hunting in. Knowing this information will allow you to pursue other kinds of wild game pending that you have the right permit to do so while bear hunting.

The Ins and Outs of Bear Hunting was last modified: February 20th, 2016 by Peter Larsen