At one time, coon hunting dogs and selling their pelts were a hunting man’s favorite pastime, with the dedicated majority of hunters enjoying coon hunting, even without getting any pelts.

Money could be made back in the 1970s and 1980s, even though most coon hunters did not hunt for the money but for the fun and pure excitement of it many were out all night and didn’t get one pelt, yet would return the following night for an encore of the fun. Pure dedication. 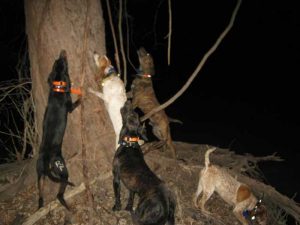 But after that and onto today, well-planned campaigns by the animal-rights groups against coon hunters and coon hunting dogs dropped the numbers so much that serious coon hunters, along with their dogs and high pelt prices have become almost a thing of the past. Of course, common sense would tell most that raccoon numbers would now be on the increase, with the damage they did to surrounding environments also increasing, causing significant problems to the human population and such.

There was now no “coon checks” on the increasing coon numbers, which by the way was becoming quite large as the raccoons bred prolifically, usually with healthy coon populations. No coon hunting dogs were around to remove the excess numbers causing such coon destruction. Don’t get me wrong; there are coon hunting dogs and coon hunting, but rather a placid shell of what it used to be with an excess of controls by nameless agencies.

More than any other sport, coon hunting is done at night and can use any dogs that are good at treeing squirrels. Also, this is good as a first time hunting for young hunters to begin their long path of hunting “big game.” Real wood skills and techniques, and an experienced dog can make a good beginning hunter of any 12-year old. After that, it is just more years and more dogs for an enjoying life of hunting coon meat for dinner.

The techniques learned as a coon hunter can be used for pursuing other animals, such as turkey, pheasant, deer, or wild hog hunting with dogs. Coon hunting dogs are just as versatile for hunting other animals, depending on their ability to smell and stamina to run for a long time. They need to be able to scent the coon in the woods while barking at the tree to alert other dogs and the hunters of the find. Hunters say that the best coondogs are the Black & Tan Coonhound, but almost any good dog will work such as the fiests or the cur as long as they are trained right and can do their job.