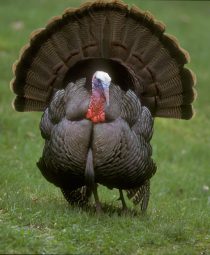 Some of the birds of this subspecies of wild turkeys can grow very large. The male adult turkey, also-called tom or gobbler, can grow up to 4 feet tall and weigh more than 20 pounds. It has a covert tail and the tips of the tail of the long feathers are tipped with chestnut brown color and a dark buff or chocolate brown. The breast feathers of the eastern wild turkey are black, while other feathers on the rest of the body have an iridescent sheen. The iridescent sheen ranges in color from rich metallic copper to bronze.

The upper set of wing feathers has white and black bars all the way from the tip to the shaft. The lower set of feathers is predominantly white and is white edged and form a white triangular area when the wings are folded up. Male turkeys also have a fleshy flap close to their beaks called caruncles, which expands due to blood rushing into the flaps when the turkey is excited. Males also often display a beard and a spur as a difference to female turkeys.

Female birds can get almost as tall as the male turkey, but in general they are much lighter than the male turkey only around 7 to 12 pounds in weight. The female turkey is called hen. Even though coloration is similar, the colors are less bright in their iridescent sheen and many female turkeys are of browner color. Female breast feathers are rather brown instead of black tipped and the heads of female eastern turkeys are covered in a certain amount of feathers, while males ones are not. Female turkeys also do not possess the caruncles around the beak.

The reproductive cycle of turkeys is in spring and young ones are hatched generally during June and to the beginning of mid-summer. Gobblers court for their females in spring until they find one that accepts their dance. After mating, females will make a shallow nest by scratching soil, rather than constructing a nest from materials. Nest sites are chosen so that the hen as a good view of the surroundings and so that the nest is safe from avian predators. The hen will lay about 10-12 eggs into her nest and cover them carefully with leaves and other materials should she leave the nest before the incubation period. Incubation period is approximately 27 days long and every hour the hen will rotate the eggs. 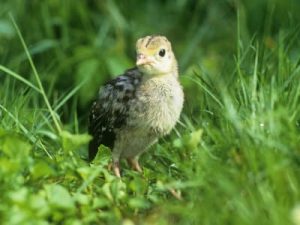 Only hours after the hatching, little poults dry up and follow their mother’s sound and learn to bond with her quickly. They learn quickly how to pick food from the floor and other turkey characteristic movements and behaviors within just 48 hours. At this point, turkey males and females are hard to hold apart, but around fourteen weeks after hatching, they become more distinguishable. It is also said that poults that survive the first 6 weeks of their life have a good chance to make it to adulthood. Over time, there a pecking order will be established and then poults are ready to enter the general social structure of the turkey flock.

The eastern wild turkey is one of the most hunted subspecies, but also the subspecies with the biggest population on this continent. If a hunter is hunting in the upper east of the United States, the chance that he is going to meet an eastern wild turkey, rather than any other kind, is very high.