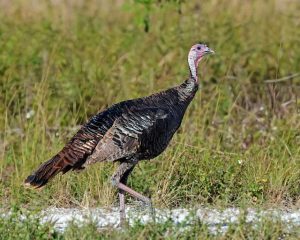 The Florida Osceola wild turkey is one of the most famous birds in the US. It’s also known by its scientific name, which is Meleagris Gallopavo Osceola. The Osceola Turkey can only be found in the peninsula of Florida. It’s similar to the eastern wild turkey in some respects, but with many important physical traits that distinguish this important modern subspecies.

The Florida Osceola was named after the famous Seminole Chief, Osceola. W.E.D. Scott first described the aforementioned turkey type in the year 1890. Chief Osceola is famous for leading his tribe against invading Americans in a twenty-year war that began in 1835.

Another characteristic is that the black bars also tend to predominate the feather. Most of the secondary feathers of the also tend to be dark in color.

The Florida Osceola wild turkey has a very distinct plumage that makes it easy to distinguish from other turkey subspecies. The feathers tend to display green and red iridescent colors. The colors on comparison with the eastern wild turkey are of a small bronze. The tail coverts have a dark color while the large tail feathers of the Florida Osceola wild turkey are dipped in brown once again similar to the eastern wild turkey. Most other western subspecies display lighter colors in these areas. The behavior and colorations of the Florida Osceola are considered to be ideal for the flat pinewoods, palmetto hammocks, oak and the swamps of its native Florida habitat. In general, the adult female turkeys, also known as hens, are similar to the males in coloration and patterns. However, hens tend to have lighter or duller colors all around, except in the wing feather region. Hens do tend to display darker wing feathers, however.

With a reproductive cycle that begins a little earlier than the eastern wild turkey. The Florida Osceola also has a reproductive cycle that occurs sooner than other Southern states. The wild turkey population in South Florida is sometimes active during warm spells in January. This particular bird has been known to gobble during these warm periods, although actual mating does not begin until several weeks later. Most Florida Osceola wild turkey will lay eggs during April. The cycle of egg laying and hatching is active throughout spring.

A Look at the Florida Osceola Wild Turkey was last modified: February 6th, 2016 by Peter Larsen