Grizzley bear hunting (also spelt grizzly) is world famous in Alaska and is also known as brown bear hunting. Brownies as they are also dubbed are very plentiful in certain Alaskan game management units. Grizzley bear hunting in Management Unit 9 for instance will be more than just a good day’s harvest. Unit 9 has one of the largest populations of grizzly bears in the world. In fact, the current world record grizzly bear was taken from Alaska Game Management Unit 21. 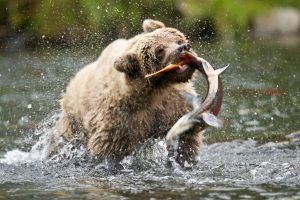 Although grizzley bear and brown bears seem to regarded as interchangeable, most guides and outfitters will tell you otherwise. Guides with years of experience say that brownies live along the coastal regions (usually within 100 miles of the shoreline of Alaska). Grizzlies on the other hand live in the interior regions of the state. (North of the 62nd parallel). Having said that though, they are also quick to point out that brownies and grizzlies are genetically the same animal. The brown bears tend to be bigger physically than those found hunting, simply because the climate they live in is more temperate and they eat high protein, high fat salmon all year.

In order to get ready to go hunting grizzley’s, there are certain things you must have to make your hunt viable. Your rifle must be 30 caliber or larger and the barrel channel glass bedded. Your best bet is a rife that shoots consistent groups in all weather conditions. You are also responsible for a number of other items such as your ammo, sleeping bags, personal items etc. Some alcohol is allowed in camp, so long as it is moderate. You can carry up to 50 pounds of gear on the bush plane that flies bear hunting clients to base camp. Please remember to bring your firearms permit.

By the way, Alaska outfitters are needed by state law to salvage meat from bear hunting and other harvested game animals. If you want to take bear meat home, you can, however it’s highly unlikely, given the size of some of the grizzley harvests that you would be able to handle that much meat. The meat is donated to food banks and other sources that put the meat to good use.

If your destination of choice to go hunting grizzley’s is Alaska, you should know their tag system is rather unique. Basically tags of equal or lower dollar value can be used for different species. So, as an example, species dollar value (highest to lowest) are: brown bear, moose, caribou, black bear, wolverine and wolf. That means that your brown bear or grizzley bear hunting tag can be used for any species mentioned in the above example and so on. Hunters like this system because it provides them with lots of choices and provides more hunting opportunities.