Bowmen have played a major role in warfare and hunting for thousands of years. Early bows were made of a single piece of wood, but composite recurve bows were being made from Greece to China as far back as the second millennium BC.

Recurve bows, those with the ends facing the ‘wrong way’ when unstrung, are more powerful inch for inch in length than single piece wooden bows, which made them more suitable to confined conditions such as on horseback, in a chariot or in wooded areas. 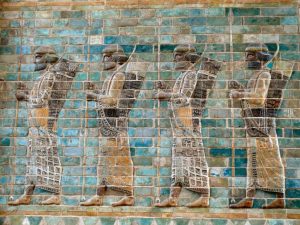 Pieces of composite recurve bows, usually made from horn, have been discovered in many regions of the world. Early arrows were made from naturally straight twigs or pine needles with napped flint tips affixed. Wooden bows did not keep so well and exemplars are scarce.

It seems that archery was being developed in the early Mesolithic or late Paleolithic Age. Archery was especially well developed in some Islamic countries and in Asia, where Zen Buddhist monks utilized archery as an element of their meditation techniques.

In the first days of archery, there were miscellaneous sentiments about archers. In those days, people fought hand to hand with swords and spears and some of the traditionalists reckoned that archers were cowards because they fought from a distance out of immediate danger. This point is made quite clear in ‘The Iliad’, Homer’s account to the siege of Troy.

There are or were many types of bows made to suit different fighting or hunting conditions. Some varieties of bow are the, long bow, short bow, recurve bow, composite recurve bow, reflex bow, decurve bow, deflex bow and crossbow among others.

The longbow was extremely hard to learn to use and the archer needed considerable upper-body strength. The bow was often six feet long with a weighty three foot long arrow. The draw weight for maximum power was around a hundred pounds and the use of the bow on a battlefield was as long-range artillery.

The heavy arrows and vicious armour-piercing arrow head would rain down on the enemy from a hundred yards or more and penetrate shields and armour as if they did not exist. Shot horizontally, the three-foot arrow could pass through a couple of people.

In fact, the longbow was so essential to the triumph of Great Britain that a law was passed making it obligatory for men over a certain age to practice with their longbows every Sunday on the village green to develop the needed expertise and upper-body strength in case war came.

There are essentially two styles of shooting: instinctive shooting, which is very demanding as the archer does not take his eyes off the target, but does not sight down the arrow, and sight shooting where the archer makes use of sights to align the arrow with its target. The majority of people find sight shooting simpler.

The History Of Archery was last modified: November 4th, 2015 by Peter Larsen