Skip to content
Home ▸ Hunting Tips ▸ Which Hunting Guns Do You Use?

When I used to go hunting with my dad, we paid very little attention to what guns we used. We had had the same hunting rifles in the family for at least a generation or two, and we figured that they worked well enough. My gun was a single shot bolt action rifle, probably an antique. It worked pretty well for my purposes, but I have to admit that it was a bit tricky at times. It would jam up sometimes, and the pull was so hard on the trigger that it was hard to time the shot exactly right. 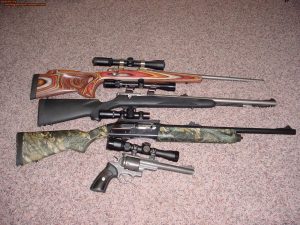 I was so used to shooting with that specific gun that I had no idea if I was missing anything. I decided to find out. The other day, I went out to buy hunting guns. I went to a hunting and camping gear supplies store. You see, I needed a lot of equipment for the season. This season was about to open, and I was out of all kinds of things. I needed waders, a nice warm jacket, a new sleeping bag, and even some camouflage. Hunting guns were just one more item on my list. They turned out to be a very important one.

I ended up getting a 308 hunting rifle. It was a much higher caliber than what I’d been using before, but I figured that it would make the job easier. With the old 22 hunting guns we used to use, it would often take several shots to bring down a deer. You would shoot it once and then it would bound away. Then you would spend all day hard following the trail just to shoot it again with the hunting gun and bring it down.

With the nice new gun, I was pretty sure that making a kill would be easier this year than ever. However, I felt like new hunting guns needed new accessories. I decided to get a hunter rifle scope to try out. When I first thought about getting a scope, I was a bit hesitant because I thought it would take all the sport out of it. Nevertheless, last year I didn’t get a single kill. I wanted to make sure that that wouldn’t happen again this year, So I decided to get the best hunting equipment that I could. Now I will see whether modern hunting guns and scopes are all they’re cracked up to be.

Which Hunting Guns Do You Use? was last modified: December 7th, 2015 by Peter Larsen