The ring-necked pheasant, native to Asia, was introduced to Iowa about 1900 after being successfully introduced to the North American continent in 1881. Their introduction to Iowa was the result of a storm that destroyed the pens of breeder William Benton of Cedar Falls, freeing about 2,000 pheasants into the wild. 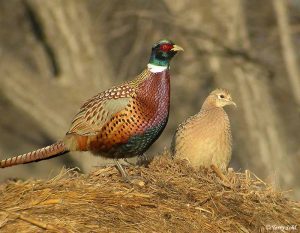 In 1910 the Department of Natural Resources began stocking the birds and today the ring-neck pheasant has become the premier game bird of Iowa. The combination of Iowas grasslands and croplands makes the state one of the top pheasant harvesting areas in the country. Many retailers refer to Iowa as the pheasant hunting capitol of the nation, making Iowa pheasant hunting an important part of the states economy

The future success of pheasant hunting preserves in Iowa depends on maintaining the pheasant habitat, which currently varies from generally improved on public lands to frequently ideal on CRP acres. A lack of uniformity characterizes conditions on private land, where farmers remove habitat and acres to enlarge fields thereby diminishing its value as habitat for pheasants and decreasing their numbers.

The north-central area of the state has, over the years, offered the best Iowa pheasant hunting opportunities, thanks in part to the actions of the Iowa Department of Natural Resources both on public and private land. However, efforts on public lands, including planting of native grasses, wildflowers and grain crops, have been offset by farming practices on private land. New farming techniques as well as structural development, residential and commercial, have eliminated more acres than have been replaced by the IDNR–thereby affecting future Iowa pheasant hunting prospects. Information important to the hunter interested in pheasant hunts in Iowa can be found from the Iowa Department of Natural Resources, which undertakes a yearly, roadside survey the first two weeks of August, when an attempt is made to assess the pheasant population.

On cool, sunny mornings with heavy dew, hen pheasants bring their chicks to the roadside to dry off before they begin feeding. While the pheasants are on the roads conservation officers and biologists have an opportunity to count the number of broods and their size as they travel 6,300 miles of gravel roads.

Other species of wildlife are counted as well as pheasants and the information is used to produce Iowas small game distribution map. Although helpful in estimating pheasant numbers, the August survey numbers don’t always reflect the number of pheasants hunters report finding. Discrepancies could be due to the timing of the survey and the timing of the spring hatch, and lower populations reported in August don’t always translate into lower harvests during hunting season.