The success of the ring-necked pheasant parallels the ups and downs of Nebraska agriculture, with the years between 1958 and 1966 being the heyday of Nebraska pheasant hunting. During those years, pheasant hunting seasons were the longest in the country, bag limits were ample, and, for a time, it was possible to shoot hens in some areas. The years of plentiful pheasants were also the years of the Soil Bank, a land-idling program designed to decrease huge grain surpluses by cutting production.

Some lost and disappearing forms of habitat, a result of the post-war changes in farming practices that were meant to increase production, were rapidly restored, and the Nebraska pheasant outlook entered a boom era. By the early 1960s, the Soil Bank in Nebraska had created 876,000 acres of the kind of prime pheasant habitat often absent on cultivated land, and many non-resident hunters came to Nebraska for the spectacular hunting opportunities, boosting the local economies.

However, the boom was short-lived, and in 1966 the retired Soil Bank acres began to be returned to cultivation, and then in 969 all the contracts had ended. In addition, by this time, not only were the Soil Bank acres gone, along with their ideal habitat, but the farming practices on the farmed acres had undergone yet another change. Larger fields, old farmsteads eliminated all to create more farmland, and, most importantly, the center pivot, which needed the removal of shelter belts and brushy thickets, combined to destroy pheasant habitat. Once again, pheasant numbers fell. During the Soil Bank years from 1960 to 1967, an average of 12.5 pheasants were counted every 100 miles, twenty years later the number was down to 2.2. Nebraska, following the trend of agricultural practices, declined. 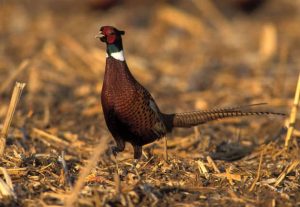 The 1985 Farm Bill created another version of the Soil Bank program, the Conservation Reserve Program, which was designed to shrink grain surpluses brought about by former farming policies and aid conservation. Counties with a high degree of participation in the CRP showed significant increases in pheasant numbers. Rural Mail Carrier surveys indicated a doubling of pheasant numbers, but the increase in the pheasant population and other wildlife was less than expected. In areas where the CRP had increased the number of pheasants, Nebraska pheasant hunting underwent something of a revival, but it has not returned to the heights of the glory days. Hunting for pheasants is still an important economic factor in the state, but with fewer pheasants, fewer hunters visit Nebraska. In 1996 about 131,000 hunters, both in and out-of state, spent 54 million dollars. Five years later hunter numbers were down to 100,000, a decrease of 24%, with 36 million dollars spent.

Its clear pheasant hunting season in Nebraska will continue to depend on farm programs such as the CRP to maintain pheasant habitat and make sure the future of the sport. Private efforts by groups such as Pheasants Forever can help enormously, but farming methods are the key to what happens with the vast majority of acres. Ultimately the future of wildlife habitat and the Nebraska pheasant hunting will depend, as always, on what happens in Washington.