Protection, hunting tool, and a weapon of war are the most popular uses of a hunting bow in the early days. As the world has evolved and technology has become available, bows are no longer seen as a weapon for destruction, but as a tool for a sport or leisure. Archery has become a sport and an art for people to engage in, the world has gone beyond the idea of archery to be a method for defense or offense. 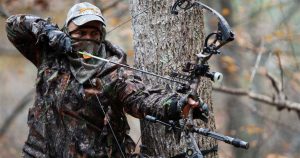 In the Paralympics alone, there are a number of specific categories, which allow compound bows to take part. Apart from this, another popular use for the bow is bow hunting. This is a more humane approach to hunting live game. It is vastly popular in the American and European regions where hunting small and large game is legal.

Hunting is another sport, which compound bows are often used. It hunts for live game the same way the traditional hunting experience does but without the need to use guns. This, according to expert archer societies allows a more humane kill of the prey. It is legal to hunt for small and large game and is popular sport around the European and American regions.

Another form of hunting is called bow fishing, from the name itself, one will be hunting for fish using their bows of choice such as compound bows. A more modernized sport for the bow is called target archery. This is the most popular competition known to archers worldwide. Perhaps, one can think of it as a giant scale dart game. In the United States and in Europe, field archery is a popular sport, it is set in a field where a number of wooded targets are placed at various distances.

Some other field archery practices involve the recreation of bow hunting in the field, this is more of a simulation as marked targets are positioned in a field where the archers must hit specific areas to gain points. It is much like a practice or a preparation exercise for those who wish to try bow hunting, as this will enhance one’s aim, accuracy and patience.

In some other category of the field archery, they use 3D targets, which will help prepare and simulate bow hunting. A number of 3D animal dummies are set at various distances and is marked with target rings the archers need to hit. This particular category enables a novice bow hunter to simulate the real hunt by means of practicing in this recreation of the sport while improving their accuracy, aim and strategic tactics. The compound bow has also become the favored choice in field archery, it has the trait of having the immunity against temperature and humidity changes which pose very little to no effect to its aim and accuracy.

There are many types of left handed bows available on the market today. If you are into hunting then the best choice should be to find a left handed compound bow for sale. Compound bows pack that extra kick for great hunting.

An Overview Of Compound Bows was last modified: January 5th, 2016 by Peter Larsen