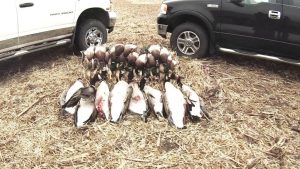 The fall goose hunting season in South Dakota opens up all species except the light geese and white-fronted geese. The accepted species include Canadian geese and brant, but proper identification of geese is critical as shooting a species that is excluded from the season is illegal. Fall goose hunting season in the state is different depending on which of the four zones you wish to hunt in. Each area has its specific dates, and there may be protected areas such as wildlife or migratory bird refuges within each zone. Carefully monitor the hunting regulations each season to make sure that the area you are hunting has not been excluded from the allowed hunting zones.

Throughout the states of South Dakota, goose hunting is allowed between one-half hour before sunlight through to the close of the hunting day at sunset. Shooting outside of these hours is illegal and will result in prosecution. Wildlife officers will actively patrol all zones and areas, so it is important always to have your hunting license and identification available.

Besides it is important only to use what is considered nontoxic shot during the South Dakota goose hunting season. The shot that is deemed acceptable includes:

Nontoxic shot will prevent any poisoning of birds that have been hit with a shot but not seriously. Previously toxic shot would eventually lead to the death of these birds, thereby depleting the population outside of the hunting season.

South Dakota goose hunting also offers opportunities for youth to get involved in the sport. During the youth season, adults may supervise and be present, but they may not hunt in the pre-season one-day youth hunt.