People around the globe enjoy the sport of duck hunting. In the United States there is some good duck almost everywhere but you find some of the best duck hunting in Arkansas, Illinois, Missouri, Tennessee, Louisiana and other Mississippi River bordering states. Some duck hunters use boats on flooded fields, small ponds, lakes and rivers while others hunt in dry rice and cornfields on foot. Some tools to use along with a shotgun include, duck decoys, waterproof clothing, and boats. 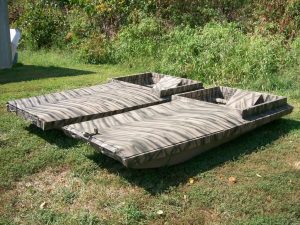 It is amazing how much literature there is on duck hunting techniques, blinds, duck calling and calls, duck hunting dogs, duck decoys, and guns but how little information is available on boats from both the past and the duck hunting boats available on today’s market. Most of the highly specialized duck or waterfowl boats like the well-known scull boats and monitor marsh boats from the 1980s through the 1940s vanished when they outlawed market gunning.

The Barnegat Bay sneakbox were famous gunning skiffs originally made for market hunters. The first boat, built in 1836, had improvements added until fully developed by 1855. It was traditionally made of well seasoned Jersey cedar and approximately twelve feet long, four feet wide with seven inches of freeboard and a three-foot dagger board. It sailed in extremely shallow water and was easy to beach. Sneakbox duck hunting boats have changed very little since then. Duck hunters nowadays use them to slip up to rafting diving ducks. A hunter will normally put out the duck decoys in open water, row upwind of these and anchor the sneakbox. Lifting anchor, they let the wind push them towards the decoys and within firing range of the canvasbacks or other ducks decoyed.

Layout boats are a one or two man boat or special gunning boats, most often used for hunting migrating divers in open waters, usually close to a large group of duck decoys. A larger boat or tender boat sometimes piggyback or tow a layout boat into position. Duck hunters often have different thoughts on what a layout duck hunting boat should or should not look like. In heavy water, hunters use stouter, larger layout boats whereas in calmer water with fewer waves, they often choose more sleek-looking layout rigs. Layout boats have a low profile and are normally less than ten feet long. The bottom line is that layout duck hunting boats are watercraft meant to hide hunters properly, protecting them from the elements, while they hunt.