While there is no doubt that fall is typically thought of as the prime hunting season for geese, there is also a spring snow goose hunting season that offers its own unique set of challenges for hunters. The spring season does not occur in every state, but in most states, especially the more northern areas, it is considered one of the first hunting seasons of the year, ideal for hunters wishing to get a jump start on fine tuning for fall hunting. In some states such as North Dakota it is possible to go snow hunting almost half of the year, with various seasons lasting approximately six months. 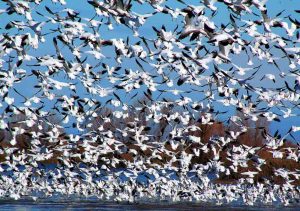 The spring goose hunts in more northerly states generally starts in mid-February, and the seasons get slightly earlier as you move further south. Unlike the fall migration, snow geese tend to be less likely to spend long periods of time in one area on the spring migration, and they tend to closely follow the melting snow line fairly consistently. It is therefore important to time your hunting with the melting of the snow. Hunting snow geese is ideal when there are still patches of snow on the ground but increasing areas of dry or bare ground, ideal for camouflage and working with blinds. Snow geese and Canada geese may hold up in one area, waiting for warm fronts to melt snow accumulations before moving farther north, but again this delay is usually relatively short in duration.

To time a snow goose session it is critical to keep an ear and eye out for reports of cold weather, spring storms or other weather conditions that may affect the northern movement. Just because the conditions are ideal for spring snow goose hunting in your area doesn’t mean the flocks may not have been stalled in bad weather further south along the route. Since ground conditions are likely to be fairly wet and sloppy, advanced scouting of fields, roadways and comfortable areas to set up blinds is critical, especially for those early morning in the dark decoy positioning outings. Know the roads and the terrain to avoid getting stuck or hopelessly mired in the middle of a field, especially if you are using vehicles instead of ATVs.

Another key point is to keep in mind that geese in the snow goose hunting season have been hunted in the southern states during the fall and winter, so they may be very leery of decors or blinds, ones that they normally wouldn’t be worried about in the fall hunt. It may be more practical to avoid decoys and work on setting up well disguised blinds rather than trying for decoys and calling to get the flocks to land.