Relative latecomers to the Great Plains of Texas, the first ring neck pheasants were introduced to the state in 1933-1934 in the Arkansas National Wildlife Refuge, but not apparently in a successful manner as none were seen after 1939. 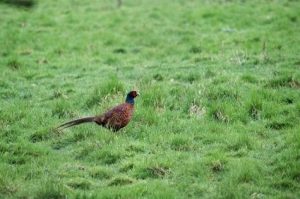 The pheasants, which formed the basis of the Texas pheasant hunting population, arrived from western Oklahoma while others were added with releases by private landowners in the Panhandle.

By 1946, the number of pheasants was probably less than 1,000, not favorable for Texas pheasant hunting. In the 1950s, changes in farming such as irrigation and the changes from ranching to farming created habitats more favorable to the pheasant, dependent as they are on grain cultivation to thrive. Consequently, increased numbers of pheasants opened more opportunities for Texas pheasant hunting success.

By the 1980s, farming methods had changed again, this time adversely affecting the number of pheasants the habitat could support. Row irrigation featuring weed-filled ditches, providing useful habitat for the ring-necks, was replaced by center-pivot irrigation systems, and dry land farmers abandoned the old practice of summer fallow in favor of more intensive cropping methods and more working of the ground, thereby decreasing vegetative cover.

The efforts of Conservation Reserve programs have helped provide more habitats for pheasants, but it has not been enough to offset the decline in pheasant numbers resulting from the long-term changes in farming practices. Along with the decrease in pheasant populations, Texas pheasant hunting has been greatly affected by the changing farming conditions.

Because Texas is so large and has many different altitudes, it features many types of terrain and varying climate conditions, offering many unique opportunities for a Texas pheasant hunting experience. The Texas pheasant hunting season begins at different times in different areas, with the shorter season in the Panhandle during the month of December only, with the needment of a game bird stamp needed to hunt ring-neck pheasants.

The Panhandle area is the stronghold of the pheasant population, where they have traditionally been most plentiful. Numerous types of hunting habitat can be found, from Conservation Program acres, grain fields, shelter belts, old homesteads, creek bottoms, to old farm carry out lots. Playa lake bottoms are an especially good choice, usually providing exciting hunting opportunities for the hunter seeking them out.

Visiting hunters who want to enlist the services of guides or need other services can find many businesses providing whatever is needed to experience the enjoyment of Texas pheasant hunting at its best. Typical outfitters will offer lodging, guides and dogs, if the hunter has not brought his own–care of the birds is also included. Additionally, outfitting businesses offer thousands of acres of leased land upon which to hunt, offering more hunting options for exciting Texas pheasant hunting trips.