Bear hunting dogs usually fall into the category of scent hounds meaning they primarily hunt by scent and not sight. Often they are used to trail and sometimes kill the game. Dogs are often hunted in packs leading the hunters behind them and eventually leading them to a treed quarry. The dogs used for bear hunting are mostly regarded as having the most sensitive noses among all canine species. Most dogs also have deep booming voices while running a scent trail. 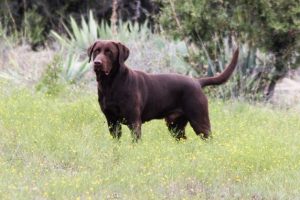 Of interest to those who like different breeds of dogs and appreciate what they do and what they are bred for, is the Karelischer Barehand or Carelian Bear Dog. A hunting spitz mainly used for hunting bear and moose. Bear hunting dogs like the Carelian Bear dog hold the game at bay by bark, and the hunter can even learn to distinguish what prey the dog is holding by its tone of bark. This dog is highly persistent and very courageous and works with the hunter using its highly developed sense of smell and direction. This is not a pet, but a working dog bred to hunt.

The history of bear hunting dogs is rather interesting. In the state of Minnesota for instance, dogs routinely tracked and treed bears. Those were the bears varmint days. Flash forward to 1971 when Minnesota listed Black bears as big game and banned hunters from using dogs to chase them. The result of banning this particular type of hunting dogs was that the Black bear population skyrocketed.

The Department of Natural Resources is in a quandary at how to control the out of control Black bear population and have started asking that dogs used to hunt bears be allowed to be used once again. A move that makes lots of sense when you consider hounds currently trail raccoons, coyotes, bobcats and foxes. What’s the difference if the dogs are brought back?

Twenty-seven states in the US allow the hunting of bears. More than half of those let hunters use dogs to hunt bears. Nine states allow hunters to use bait. Wisconsin allows bait and dogs. Bear hunting dogs are permitted in only two provinces in Canada, Ontario, and British Columbia. Often fitted with hi-tech radio collars, hunters monitoring the signal determine the exact location of the cornered bear and arrive for the harvest.

The dog tracking collar has two parts, the radio collar transmitter, and the receiver. The dog wears the collar and the radio transmitter is connected to a collar strap. It has one or two antennas. The Radio Collar/Transmitter sends a signal on a set frequency and can be detected by the hunter/handler’s receiver. For trailing bear, the collar you would most likely consider using would be the Tree Switch collar that tells you if your bear hunting dogs have treed their prey.