A trophy whitetail deer’s most vulnerable time is when you, the hunter, are deer hunting the rut. This is the time a trophy buck is actively seeking to breed. Caution takes a back seat to their instinct for chasing does and breeding them.

There are three periods of the rut. The first is called “the pre-rut”. Beginning in late summer or early autumn the blood flow to a buck’s soft antlers stop; they then harden or calcify. The whitetail buck rubs small trees to remove the velvet on his antlers which is now drying up and beginning to shed. A buck is also scent marking trees by rubbing them with the pre-orbital glands located in his forehead, thus marking his home territory. The rubbing of trees is also a means of strengthening a whitetail’s neck. This prepares him for upcoming light sparring sessions with other buck’s to establish a dominance order to the local deer herd. The dominant bucks are the older males, they are larger and have the best genetic make-up. These are the trophy deer that do most of the breeding. It’s natures way of ensuring the survival of the fittest and passing on the best genes.

Hunting The Rut And Signs To Look For

Trophy deer also leave other signs besides tree rubs in and around your hunting land during the rut. They make scrapes on deer trails under trees or brush by pawing at the ground. Then they lick and rub over-hanging branches and limbs.

A buck will leave a scent from their inter-digital foot glands (note hair separation between the back dew claws) while scraping at the ground.

They urinate on the ground and on their own tarsal glands; scent marking the scrape as their own.

A buck will establish what’s called a scrape line by deer hunters. The making of many scrapes on deer trails in a hunting area.

These are some of the major signs you will want to notice in scouting your hunting land and then plan your hunting trips to these hunting areas. Thereby taking advantage of the time of year and hunting the rut.

The Main Breeding Period Of The Rut

It is during this phase of the rut that most trophy deer hunting is done. It doesn’t matter if your archery hunting or on a guided deer hunt. This is the time of year that most whitetail deer hunting takes place. During the second period of the rut, a buck will periodically check his scrapes to see if a doe has visited his scrape line and may be approaching its estrus cycle. The does during this period experience a hormonal change that prepares them for the whitetails breeding period. They also move about more leaving more areas scented by them. When they are approaching their estrus cycle they will visit a scrape, scent mark it themselves, sometimes by urinating. When the mature buck locates a doe on the verge of estrus he will chase after her and usually stay with her until she lets him tend her. When the does enter her estrus cycle and is ready to be breed she will urinate confirming to the buck that she is ready. The buck is now super stimulated and has only one thing on his mind.

Tips For Hunting The Rut

When hunting the rut, sometimes a deer hunter will see a doe travel by their hunting stand, tail out, sort of fanning the air, alert to something behind them. Be alert because a buck may not be far behind; with his neck outstretched and head low to the ground making low grunting sounds, in search of his afternoon delight. Once they mate, a buck will stay with that specific doe and they will mate often until her scent confirms she is out of estrus and or bred. This peak estrus cycle lasts about 24-hours. This is where the term “The Peak Of The Rut” comes from, the date in which most breeding activity takes place. It is said to be triggered by the amount (hours of) of sunlight, in a day, entering the whitetails eyes. The timing of all this activity is nature’s way of ensuring the gestation time-table for the fawn birthing in the spring. This way, a young fawn will have ample time to grow and get strong enough to survive the next year into adulthood.

The Last Phase Of The Rut

The last period of the rut termed the second rut, usually late autumn, is the time that the hormone levels of deer decrease, most female deer of age have been bred by now. There are a few doe who were not bred during the past estrus cycle who will now enter this breeding cycle again and probably be bred this time. Also; many female yearlings will come into their first estrus cycle during this last phase of the rut and will be breed at this time. As the last period of the rut winds down the whitetails daily routine returns to normal. Now the deer, especially the bucks, have to replenish their strength and body fat to prepare them for the winter months ahead. Hunting the second phase of the rut during this period can be very productive as most deer return to somewhat predictive behavior because they have to feed heavily to prepare for the winter months ahead. 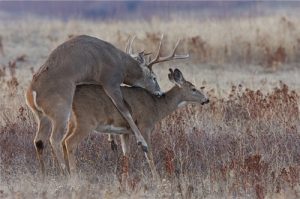 Hunting The Rut – Timing It