When hunting deer, there is always the idea of trophy deer hunting in the back of most hunters minds. They all want to bag that prize-winning buck with the antlers that can hang on the wall in their homes. You’ve probably thought about trophy deer hunts a time or two as well. What you really want to know is what constitutes a true trophy and where they can be found. Know that there are plenty of areas where guided whitetail hunts can turn up a good opportunity, if you know where to start. 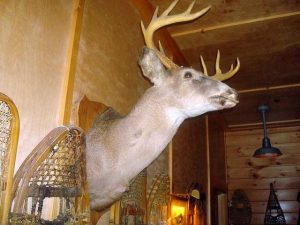 On many deer farms and preserves where deer hunting takes place, there are tons of opportunities for large bucks that could be considered trophies. First of all, lets explore where to look for trophy deer. Hunting in the Illinois Ohio Valley can turn up a great number of trophy deer due to the number of farms there, as well as the strict guidelines on harvesting. It is not allowed to take young bucks scoring less than 125, allowing for a great rate of maturity, so many bucks in this area are typically running around 208 on average. On any well-managed farm or preserve, you’ll find statistics like this available because such deer are fed more than just vegetation and receive a source of protein that establishes a much larger size.

In general, though, trophy deer hunting varies based on the type of deer that you are hunting. For example, a trophy sized mule deer is going to be much larger than a trophy white-tail. How do you determine if your whitetail trophy hunt has been successful? Deer size is judged by far largely on the points system, determined by measuring several points on the antlers. There are extremely strict regulations on measuring these points.

First of all, you have to know how many points each of the two antlers have. These will be labeled G, followed by a number that determines how far away (in quantity) the point is from the main beam. Then, you measure the spreads there are three places of measurement here. You’ll also measure the length of all points, including abnormal points, the length of the main beam, and the length of each point. Add to these the circumferences of various parts of the main branch, and then take out the difference in lengths between the various points. The overall total achieved is the point ranking of the deer.

When trophy deer hunting, it is important to be aware of these measurements and what is considered a trophy sized specimen from among the species you are hunting. When you have become familiar with the typical sizes and what they look like, you’ll begin to judge without a tape measure and make an estimate as to whether your current target is going to fit the bill.