How did the turkey become the symbol of Thanksgiving? 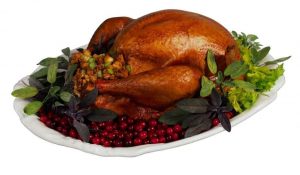 How did turkeys get their curious name?

The reason they are named turkeys is that the Spaniards imported them by passing through a route that took them through the country of Turkey. In those early days, the wild turkeys were confused with the guinea fowl, and both were often called turkeys. Even after the wild bird was assigned its scientific name, the common name of turkey persisted, and persists to this very day. Curiously, a common Native American name for turkeys was peru. This made no reference to the South American country of the same name. Also interesting is that the Pilgrims brought with them several domesticated turkeys on their long voyage to America in 1620.

Early History of the American Turkey

The wild turkey that became the early American version of this popular game animal was introduced to the first Pilgrim settlers by the Wampanoag tribe. This was shortly after the Pilgrims arrival in 1620. That first year, for the pilgrims, was remarkably bleak. It is said that many of the first wave of pilgrims died on the journey. During that first winter, roughly 46 of the original 102 pilgrims are recorded to have died. They did not have much luck planting. Most of the seeds that the pilgrims first planted did not produce any viable crops, except for barley. It is said that members of the Wampanoag tribe helped the Pilgrim settlers. They helped them by introducing them to native plants and foods, and showing them how to successfully cultivate these plants of foods. These included squash and corn. The Wampanoag also helped the Pilgrims by teaching them how to fish and hunt in the local areas. The Thanksgiving holiday can be traced back to the year 1621. The feast was celebrated at the request of Governor William Bradford, to rejoice in the success of a healthy harvest season. The Wampanoag were the guests of honor at this first Thanksgiving.

Was There Turkey at the First Thanksgiving?

There is a bit of controversy swirling around the first Thanksgiving feast, as no one can say for sure whether the Pilgrims and the Wampanoag feasted on wild turkey. There are no specific accounts or mention of wild turkey in the Edward Winslow’s much-referenced account of that first Thanksgiving feast. However, there is specific reference to fowl. Fowl, most historians assume, included wild turkeys and dusks. On December 12, 1621, Edward Winslow wrote a letter that made mention of all the food that was consumed at this much-remembered feast. The letter makes specific mention of Indian corn, barley and fowl, which were hunted by four men in one day, and which provided enough to serve for almost a whole week. This letter, published in 1622, is often referred to as evidence for the claim that wild turkey was indeed served and eaten on that first Thanksgiving Day feast.

About twenty years later, William Bradford set down another description of that first Thanksgiving Day feast. In it, he refers to the small harvest that was collected and celebrated on that day. In his history of that day, Bradford makes specific mention of a “great store of wild turkeys.” Many point to this as evidence that the turkey has played an important part in the history of the Thanksgiving holiday since the first celebration took place.

A Brief History on Turkey in The First Thanksgiving was last modified: December 11th, 2015 by Peter Larsen