Duck hunters use duck decoys to lure unsuspecting waterfowl into range so that the waiting hunters are able to shoot the ducks. Although they still use decoys for hunting, many antique and collectible stores have vintage duck hunting decoys in their shops to lure in antique collectors. 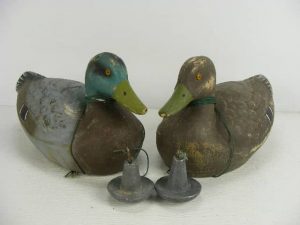 In North America, duck decoy history dates back over two thousand years and even further back in Egypt and other areas of the world.

The Smithsonian Museum houses many of the oldest vintage decoys found in the United States, Canada and other parts of North America. They found many of these unique bird replicas along with native pottery pieces in a cave in Arizona. They made traditional, hand carved, wooden decoys primarily from the mid eighteen hundreds to approximately the mid nineteen hundreds.

Vintage duck hunting decoys are wished folk art to many collectors, beautiful works of art to numerous duck collectors, and to some people they are simply wonderful country accents. Vintage decoys along with other old items are highly collectible and sought after.

Some vintage decoys are very sough after and include:

For people interested in collecting duck related vintage decoys, be careful of reproductions, which fool many collectors. Telling an average decoy from a valuable one and a new one from an old one is often very tricky.

Vintage decoys had solid color formalized patterns whereas contemporary ones have real looking feather painting. Many of the old decoys had eyes made of metal tacks, or ones they carved by hand and painted. They used glass eyes on the later duck decoys.

Because they carved the decoys in the nineteenth century by hand using a rasp, draw-knife, and hand ax, always look for tool marks on the decoy.

By the mid 1850s, they carved hollow decoys made of up to three sections. They also used wood and metal silhouettes know as stick-ups and shadow decoys.

Look for the vintage duck hunting decoys makers name on the keel weight if the decoy still has one attached. After the Civil War, the duck decoys tail and beak were carved and its body made of cork.