White tailed deer leave several recognizable evidences of their existence. To search for deer, try to find some of the obvious white tailed deer signs. Some signs are dramatic, some other subtle. Deer tell us stories using the signs they leave. By understanding the signs, you obtain information of their activities which enable you to organize your hunting tactics. 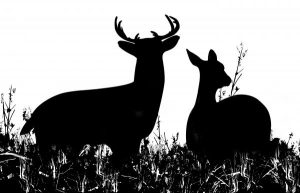 New scrapes can be found almost year-round, but the largest percentage of scrapes come into sight when breeding time begins. As the bachelor groups formed in summer months divide and bucks become solo travelers, scraping activity raises to a great extent. This happens a couple weeks before the first females breed.

Most of the active scrapes will have an overhanging branch. White-tailed bucks, nibble, chew, lick, sniff and thrash the overhanging branch above the scrape. They grasp it with the teeth and pull it down. They twist it and rake their antlers through it and rub their forehead scent glands on it. The process is mindful and planned, bordering on pure ecstasy.

Buck rubs usually are part of the communication system of deer. We identify rubs – the white scars of the forest – by sight. More often than not deer detect them just by smell. A buck rubs agree to the base of his antlers, not the tines. In the operation, he deposits scent from glands within the forehead. More often than not, the bigger the tree rubbed, the bigger the buck responsible for the rub.

Deer hunters often times use the terms ‘runway’, ‘trail’ and ‘crossing’ interchangeably, but they aren’t totally the same thing. Deer paths are distinct and noticeable paths, or runways, in the low-lying vegetation as a result of frequent use. A crossing is really a limited place which deer are likely to pass through. In regions of heavy grass or ferns, search for body-width trails where deer have broken down foliage 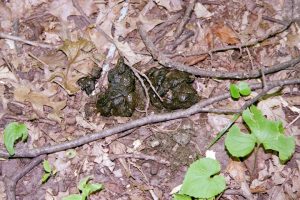 Deer waste frequently represent the only or primary indication we have of the existence of deer. Droppings can vary a good deal in shape, color and form at different times of the year. While in the winter months, when deer feed on browse, the pellets are hard and turn harder as the winter season advances, they are various tones of brown and about three-quarters of an inch long. During the summer, when deer nourish themselves on soft vegetation, the droppings contain clusters of soft, green pellets that are approximately stuck together in a single mass.

Deer beds are oval-shaped depressions in leaves, grass, dirt or snow where deer rested to conserve energy, or chew the cud. Deer bed down for as long as an hour and a half at a time. It is not known how much actual sleeping is done by a deer in its bed, or whether deer sleep at all. Deer sometimes will lay their heads back on a flank or hind leg, their eyelids will droop, and total alertness will be lost. For practical purposes, this can be considered sleep.

Many whitetails have easy access to salt put out for cattle and horses. In addition, deer use natural mineral deposits in the woods. Natural licks are often found in poorly drained soil in bottom lands. Water collects in these areas and stands until dissipated by evaporation, leaving its dissolved minerals.

When deer run, they leave prints with their hooves and dewclaws. Dewclaws also show up in the tracks of heavy deer when walking on soft ground or snow. Generally, the more toe spread and the deeper the impression, the larger the deer. 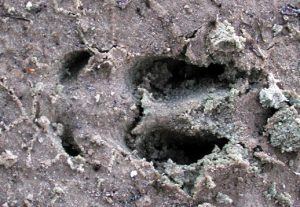 Can you distinguish the difference among a buck track and a doe track by shape and size of the track? Some hunters and scientists believe they can; others say the only sure way is to see the deer that made the track. If you find prints that are prominently longer and deeper than other tracks in an area, the maker could by an exceptional buck-or a very large doe.

As a buck’s supply of testosterone decreases in winter, a separation layer forms at the pedicel of the antlers and they fall off. In the north, this casting of antlers occurs from mid December to late January. Farther south, some bucks retain their antlers until March or April. Latitude itself, however is not the main cause for this difference in timing.

How To Know The White Tailed Deer Signs? was last modified: December 8th, 2015 by Peter Larsen